During lockdown I watched Born in Gaza, a Netflix documentary. I will not comment on the accuracy of the journalism or on politics. What cannot be disputed is these are people who have lost everything – a way of life, community, family members, friends and for many their homes (see Your plan, life’s plan).

I had been aware of the conflict so this didn’t shock me. I expected to see a lot of anger, aggression, bitterness and hatred.

What surprised me from many of those interviewed was the opposite, a gentleness and softness. There will be those who are angry and fighting but for others there is a deep humility and love present.

People I would want to meet and spend time with – an example that nothing real can be destroyed.

I know of a friend who was scared of awakening because he thought he would forget who he was and who his family were. This did not and does not happen. However, he was aware that the more he awakened there would be letting go of that which is not real and outgrown.

You may have become attached to things that are false and there can be a struggle to hang on.

The majority of people are afraid of letting go and the emotions which go with it which is a shame as it is a natural part of life, ups and downs, ebbs and flow. I think a beautiful explanation of grief and how to handle appropriately, avoiding needless (sometimes endless) suffering is that of Martha Beck.

In one of her books she explains that watching her son with downs syndrome grieve for a close family friend was enlightening.

He did not attach the usual stories to grief like most people do and so his grief was natural. It would come in waves and without resistance, last only minutes before subsiding. The waves came more frequently to begin with and then as time passed they became less so. And so it is.

If you are struggling to stay connected or feeling stuck you can download and read The Key to Mental Health.

The people in Gaza do not have the luxury of needless suffering, the ability to indulge themselves, they are in a war zone. The people interviewed in the documentary show the worst things in life can happen to you but there is one thing that can never be destroyed ……

The ability to love.  The real. 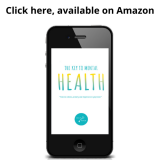